Discovering the Haunted Wrecks of Bermuda on a Diving Charter

Are you a thrill-seeker who loves the call of adventure and doesn’t mind a good scare? If you’re looking for something mesmerising, intriguing, and downright creepy then look no further than Bermuda, the ultimate destination for a spooky dive. 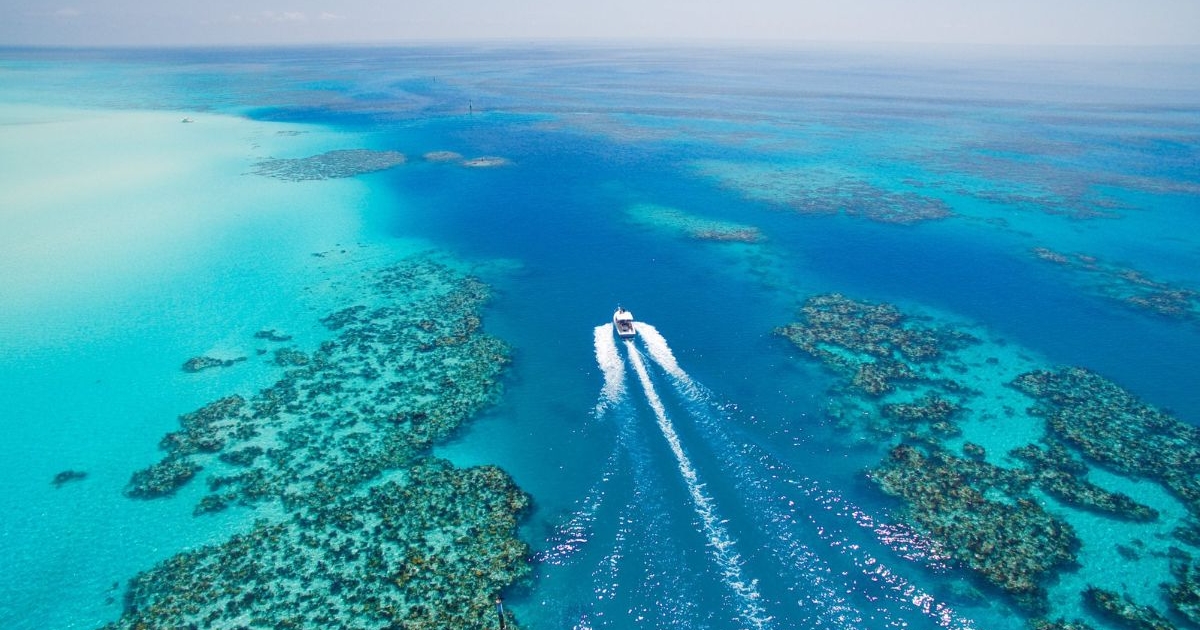 Why Bermuda? Mysterious disappearances, real-life underwater monsters, hundreds of shipwrecks to explore – the list goes on. Found in the North Atlantic Ocean and surrounded by fringing coral reefs, Bermuda already offers fantastic diving for anyone delighted by diverse and stunning aquatic species. But if it’s the eerie and uncanny you’re after, Bermuda hits the mark too!

You may already be familiar with strange stories about the Bermuda Triangle – a peculiar region where planes and ships seem to disappear into thin air – but did you know that Bermuda is also known as the Wreck Capital of the Atlantic?

There are over 300 sunken ships scattered around Bermuda. Some even date back to the 1600’s thanks to Bermuda’s extra shallow reefs. With so many ghostly shipwrecks to explore, it’s easy to see why the Bermuda Triangle has become the stuff of myth (and no doubt nightmare for some). 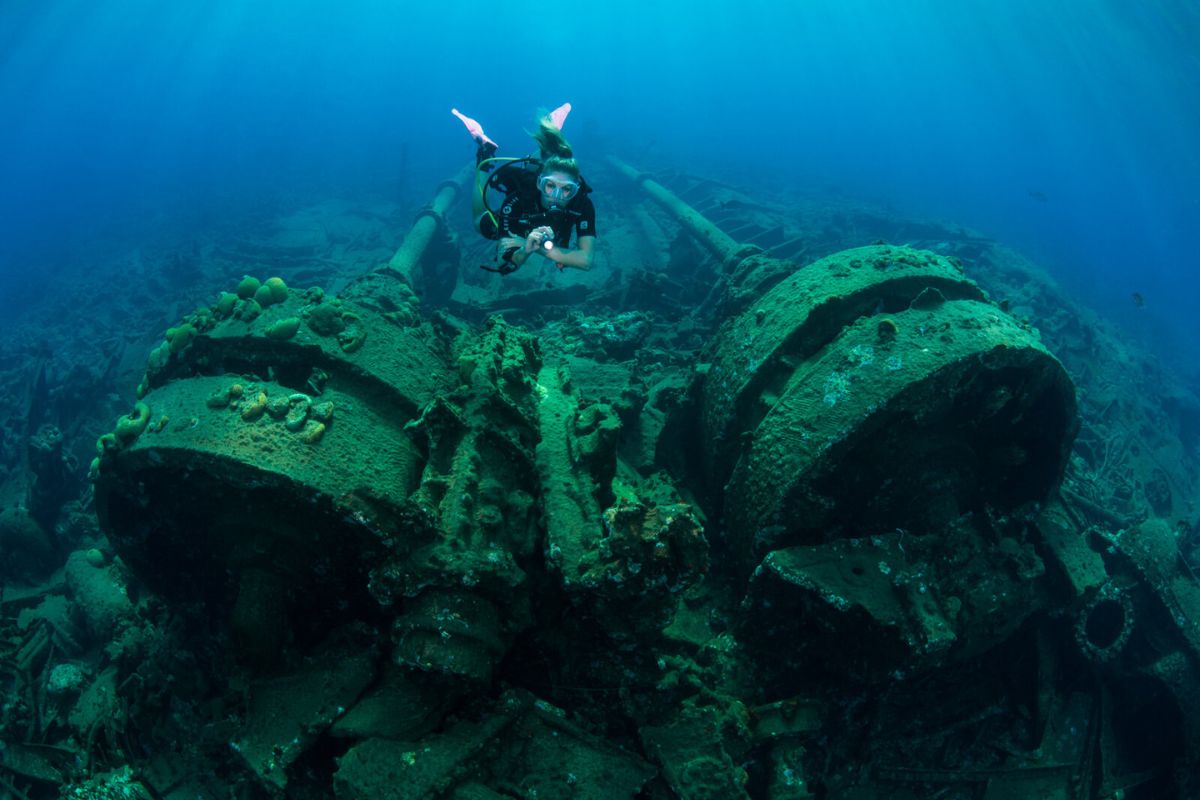 Bermuda is known for all kinds of bizarre natural phenomena. From ultra-extreme weather and uneven seafloors to strong electromagnetic field pulls (ever heard of electronic fog?!) and unpredictable rogue waves, it’s no wonder there have been so many shipwrecks around the island over the years. At a depth of 27,493 feet, the Bermuda Triangle is home to the deepest point of the Atlantic Ocean at the Puerto Rico Trench in the Milwaukee Depth.

The Bermuda Triangle has long been renowned as a creepy spot that pilots and ship captains alike would prefer to avoid. There are countless tales of ships, planes, and submarines that have gone missing without a trace, and while there are over 300 wrecks found on the ocean floor, many disappearances remain a mystery. It’s estimated that at least 50 airplanes and 20 ships are unaccounted for to this day.

The Bimini vortex often comes up as an oddity connected to the Bermuda Triangle. It’s described as a unique spot where compasses spin, and electronics fail to work properly. Even more strange are reports of dolphins that appear very suddenly and come right up to divers. Some attribute the anomalies to “electronic fog” which is described as an electromagnetic field that appears as a cloud over the ocean, engulfing a ship and causing its electronics to malfunction. While pilots and coast guards have indeed reported uncanny fog in the area, electronic fog remains a supernatural theory that makes the Bermuda Triangle even more mysterious. 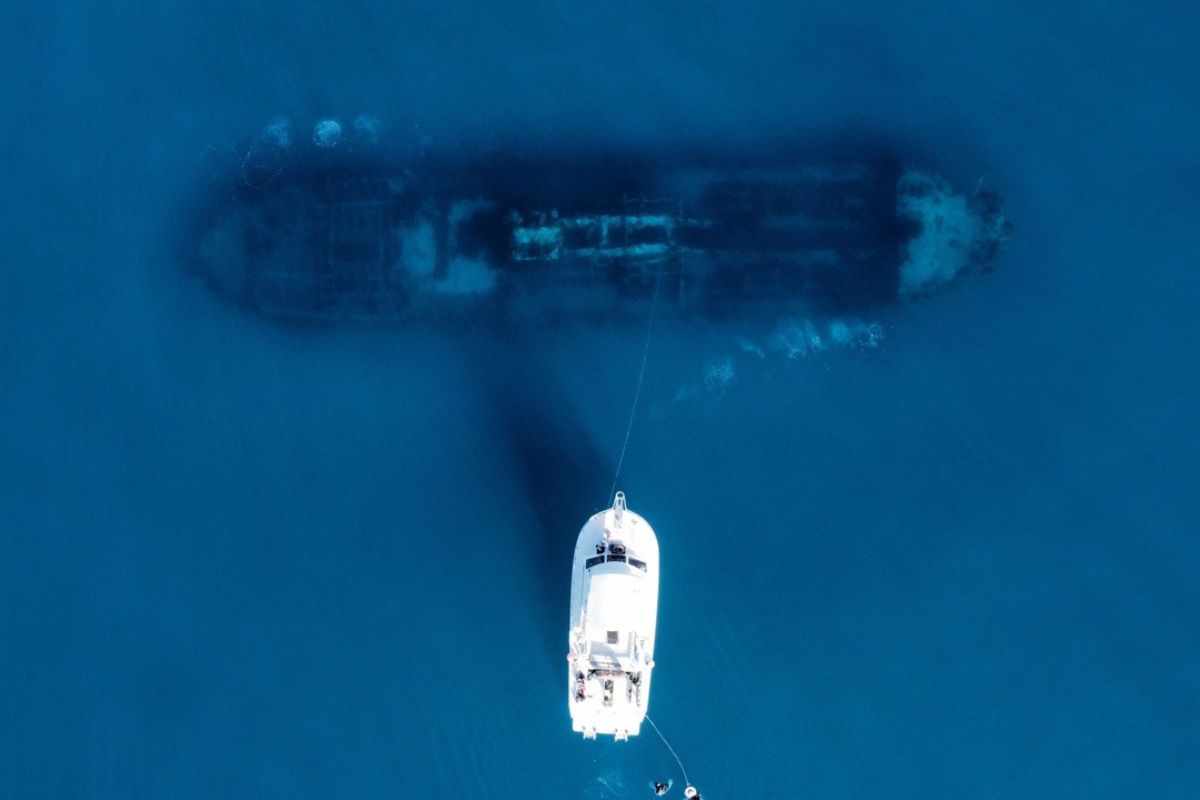 The city of Atlantis is a fictional story that originated with Plato about a lost civilization that was wise and powerful. Some of the stranger myths about the Bermuda Triangle suggest that the inexplicable magnetic anomalies found in the area are connected to ancient technologies left behind from Atlantis. Paranormal writer Charles Berlitz brought this idea to life, also suggesting that Atlantis was the cause of the many mysterious disappearances in the Bermuda Triangle.

Dive on the east end of Bermuda and you’ll discover the Cathedral site, where a beautiful and ethereal series of coral formations are inhabited by a host of spectacular fish. What makes the Cathedral so special is its vaulted reef structure that creates a natural skylight when you’re in the depths of your dive – talk about mood lighting! A single shaft of light through a hole at the top of the reef illuminates the otherwise dark and spooky waters at depths of 55 feet.

To the west you’ll find Eel Garden, named after garden eels, where the critters will jump out and try to give you a fright as you delve through shallow and deep waters at depths from 30 to 70 feet. Not to worry – although they may startle you, these eels simply want to wave hello when they pop their heads out from the sand. 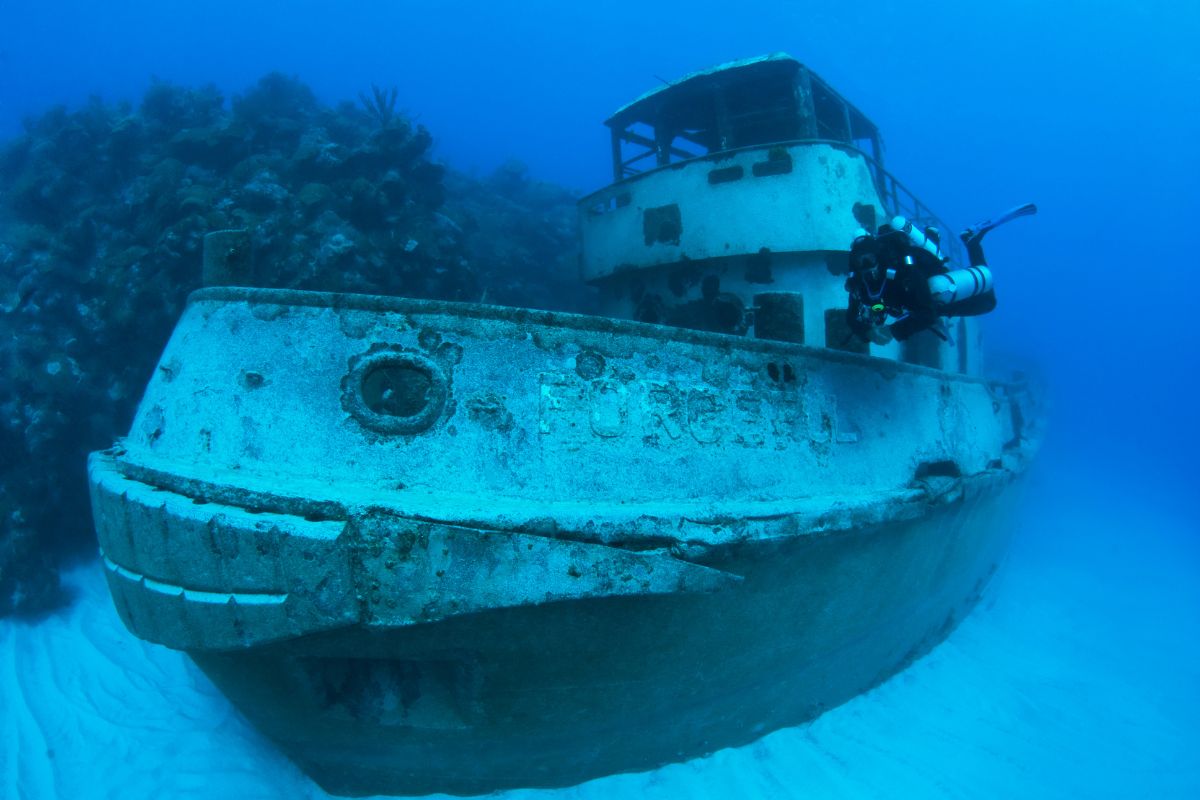 The real monsters in Bermuda aren’t the friendly garden eels. Instead, you need to watch out for lionfish, an invasive species in the Atlantic that reproduces quickly (laying up to 2 million eggs a year!) and feeds on small crustaceans and fish. Because they have such an impact on the local ecosystem, lionfish culling is a common practice in Bermuda. You can help in the hunt to take down these real-life monsters with the PADI Bermuda Invasive Lionfish Culler Distinctive Specialty.

While Bermuda is famous for the extensive number of shipwrecks scattered around the island, there’s more to be found in the deep blue. Divers can also visit the skeleton of a B-50 Bomber that crashed into the watery depths of the Atlantic in 1963. The airplane went down after its jet engine exploded and to this day divers can find the remains of bent propellers, wings, and fuselage at a depth of 25 feet.

The Top 7 Wrecks to Dive in Bermuda

Also known as the Mary Celeste, this Civil War-era paddle steamer hit a coral reef and sank to her watery grave 1884. She’s known as one of the oldest wrecks in the area and is well-preserved considering: divers can view both her intact paddlewheel and engine, plus her bow, stern, boilers, and anchor. Resting at 55 feet below the surface, a little piece of Mary Celestia made its way above water in 2015 after a few bottles of 150-year-old wine were discovered and delivered to sommeliers for sampling in Charleston, South Carolina.

This enormous ship is the largest wreck in all of Bermuda. Coming in at a whopping 499 feet long, the Cristóbal Colón was a Spanish luxury liner that crashed into a coral reef off the north shore in 1936. With an abundance of marine life that’s settled in and around the wreckage strewn across 100,000 square feet of the sea floor, she’s visited by snorkelers and divers alike. Today she can be found at depths of 15 to 60 feet, but she used to peek out the surface of the water when she first sank, up until she was used for target practice in World War II. 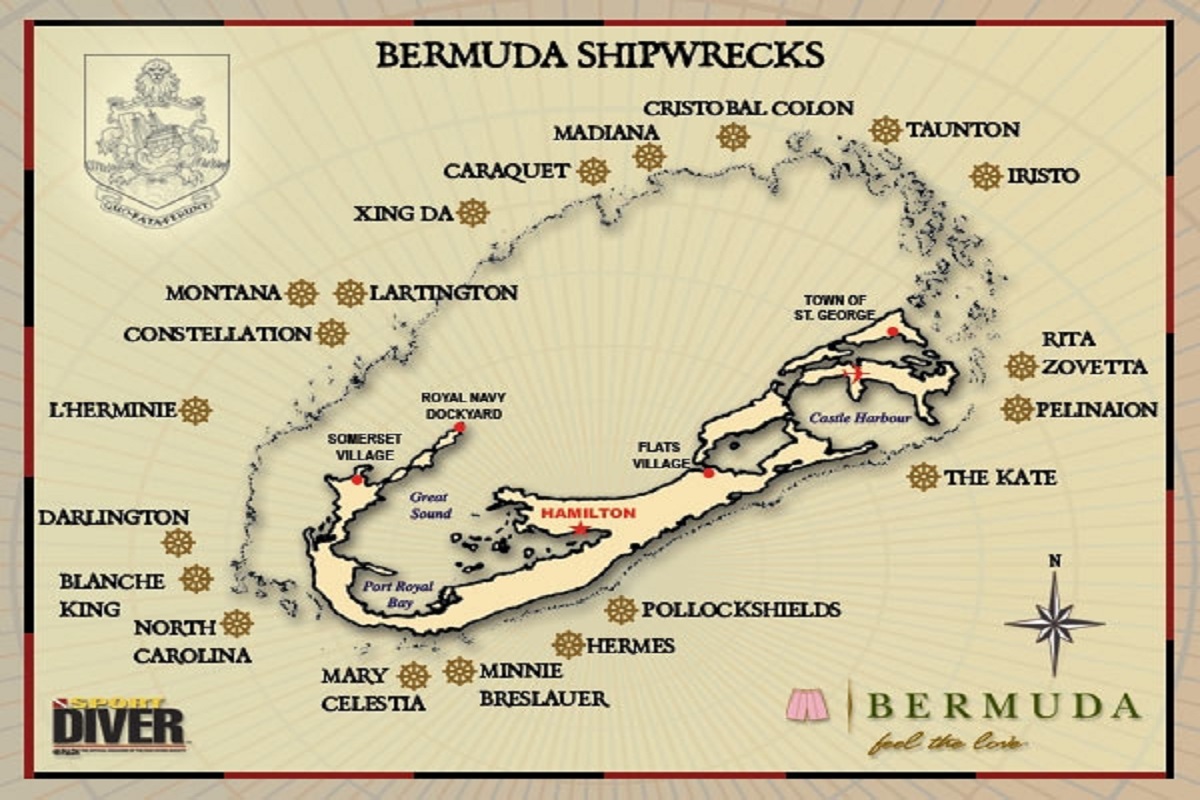 Only a year after the Cristóbal Colón went down, the Iristo (also known as the Aristo) followed in 1937. The captain of the Norwegian freighter is said to have been startled by the Cristóbal Colón’s wreckage, which ultimately led to the Iristo’s own untimely fate. He ordered the crew to change course but the Iristo struck a submerged reef and went down too! Her wreckage remains to this day with engine, boilers, and propeller visible amongst spectacular coral.

Looking for an extra spooky dive? Check out the North Carolina’s ghostly “deadeyes” in rows along her deck railings – the uncanny sailing riggings look just like cartoon skulls. At depths between 25 and 45 feet, she makes for an eerie visit whether taking a shallow dive as a beginner or diving into the deep. Hailing from Liverpool, this 250-foot English iron hull sank on New Year’s Day in 1880 when she ran aground southwest of Bermuda. Despite attempts to raise her, she remains in the depths of the sea sitting upright with a collapsed mid-section.

5. The Montana and the Constellation

Get a two-for-one dive in when you visit the Montana and the Constellation, uniquely stacked on top of each other to the northwest of Bermuda. The Montana wreck dates back to 1863 – the Civil War era blockade runner hit a shallow reef and down she went. The Constellation followed eighty years later in 1943 and some reports state that the Montana’s bow took her down! The American cargo ship was carrying building materials and scotch when she went down, so divers can view stacks of cement bags and glassware when they explore these shallow waters. 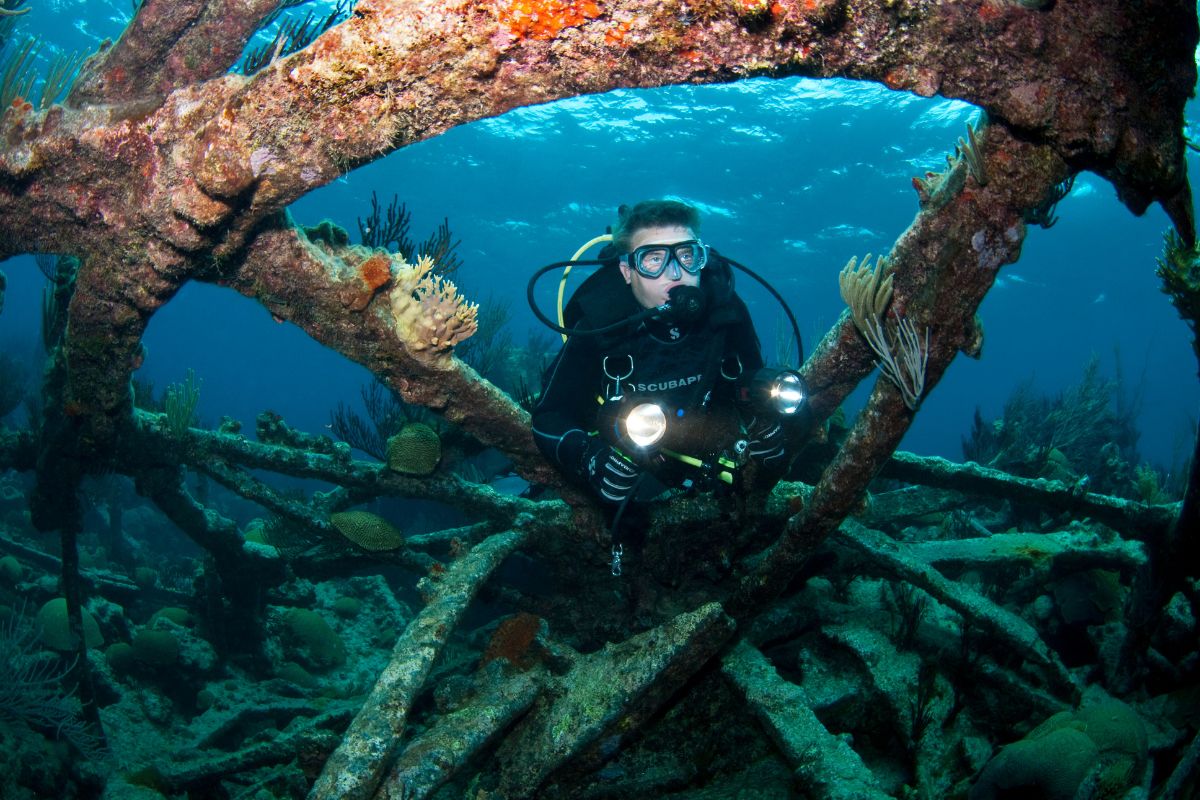 Explore the outside or inside of Hermes, a freighter that experienced engine trouble and was abandoned by her crew. Built in 1943, the lonely ship was deserted until 1984 when she was acquired by the Bermuda Dive Association and turned into a sunken artificial reef. She’s known as a highly photogenic beauty with fantastic visibility. Fully intact with her mast pointing to the surface, Hermes has come a long way from desertion as one of Bermuda’s most popular dive sites.

Another lonely and ghostly ship left to sink to the bottom of the sea, the King George is a large dredger that was built for the Bermuda Government. After arriving on the island in 1911, she served a few years before being towed out to sea and left to sink in 1930 when she was no longer needed for harbor operations. Fully intact and upright, divers can circle her from end to end on the quiet ocean floor.

Top 10 Dive Spots in the Caribbean

Exploring the Deep Blue on a Diving Charter