Dr Emma Heslop: The Science We Need for the Ocean We Want

Written By: Rosalinda Much

Dr Emma Heslop, a physical oceanographer and Programme Specialist at the Intergovernmental Oceanographic Commission of UNESCO heads up a system for the monitoring of the oceans as part of the UN Decade of Ocean Science for Sustainable Development 2021-2030. 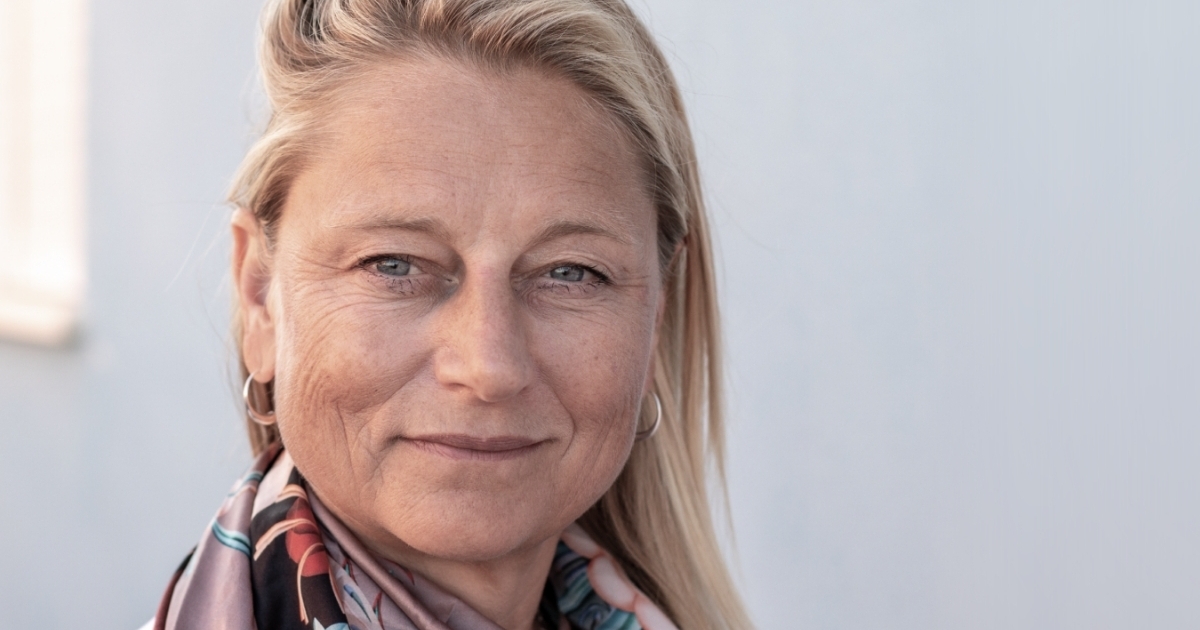 Both a Programme Specialist for the Global Ocean Observing System (GOOS) at the Intergovernmental Oceanographic Commission (IOC) of UNESCO and a physical oceanographer, Dr Emma Heslop is currently supporting the development of a system for the monitoring of the ocean, including as part of the UN Decade of Ocean Science for Sustainable Development 2021-2030 (hereafter Ocean Decade).

After taking a degree in geology and a Master’s in business management, Emma worked in sales and marketing within the IT industry. However, her true passion lay with the ocean and in 2003 she took time out to learn and then to sail across the Atlantic with her partner.

Their Atlantic crossing took 18 days and eight hours, giving her the opportunity to appreciate how big the ocean is and understand more deeply the interaction between their yacht’s sails, the wind, the waves and the currents. While travelling to ports in the Mediterranean and the Caribbean, Emma also recognised the importance of local knowledge regarding the health of the surrounding waters and weather conditions.

It soon became clear that major changes were underway and, wanting to pursue a more active role in supporting the ocean, she enrolled for a Master’s degree in Oceanography at Southampton University, subsequently working with a regional ocean observing system (SOCIB) in the Balearic Islands, before taking up her position at the Global Ocean Observing System (GOOS). “I am passionate about the need to observe the ocean and ensuring that the data is used as widely as possible,” says Emma.

The Need for GOOS

GOOS was set up in 1991 to coordinate the observing of the ocean, initially focused on understanding climate and serving as the backbone for global ocean and weather forecast systems. The need for ocean observations is increasing dramatically due to growing impacts of climate change and poor health of parts of the ocean. The focus is currently on the Global Ocean Observing System 2030 Strategy which aims to unite an international community of regional, national and international observation programmes, governments, UN agencies, research organizations, individual scientists, data systems and data delivery services to create an integrated and responsive global observing system, supporting viable solutions for a sustainable future. 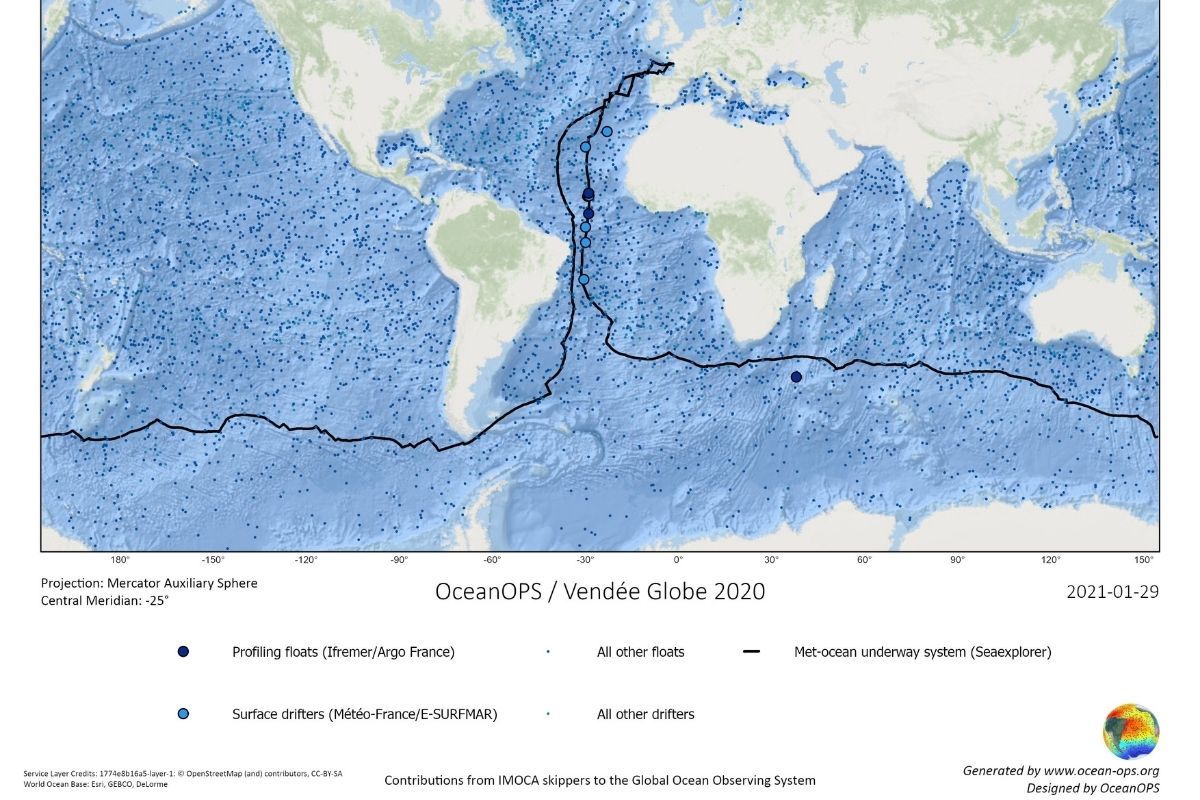 “GOOS is now tasked with making a step change difference to ocean observing, and playing a key role in the Ocean Decade, delivering the science, observations and communications necessary for a future with a sustainable ocean,” Emma told OnboardOnline. “We need much more research to enable a vibrant conversation about adaption to climate change to give policy makers the tools they need to create sustainable policy for the future.”

“The ocean is now under severe pressure, and we are feeling the impact of climate change in many areas. It’s happening at a faster rate than I anticipated and the global community must act. Mankind has depended on the ocean for centuries - it provides a baseline for the food chain and affects many people’s livelihoods. Ocean Decade is the best vehicle to effect the necessary changes over the next 10 years.”

While everyone on the planet is affected by the wellbeing of the ocean, it’s of particular concern for small island coastal states in the Caribbean and Pacific. Around 80% of their GDP can be linked to the ocean. However, the ocean influences the economy of all coastal nations, including the UK, USA and Australia through activities such as fishing, renewable energy, tourism, shipping and mari-culture.

“Ocean and coupled ocean-atmosphere processes also create large-scale change in the seasonal weather patterns (eg. el Niño/la Niña) which affect even land-locked national economies through farming, construction, and other activities, and populations through heat waves and wildfires. The ocean is a major factor in the climate system.”

“However we cannot simply take measurements once and expect to understand the ocean – it must be a sustained process. In general you need at least 10 years of sustained ocean observation to detect signs of long-term climatic change, and 30 years for more noisy biological processes,” adds Emma. “To monitor phenomena such as a hurricane, it’s vital to get sub-surface profiles of the water column to better predict its strength before it makes landfall. We need platforms in the water to do this.” 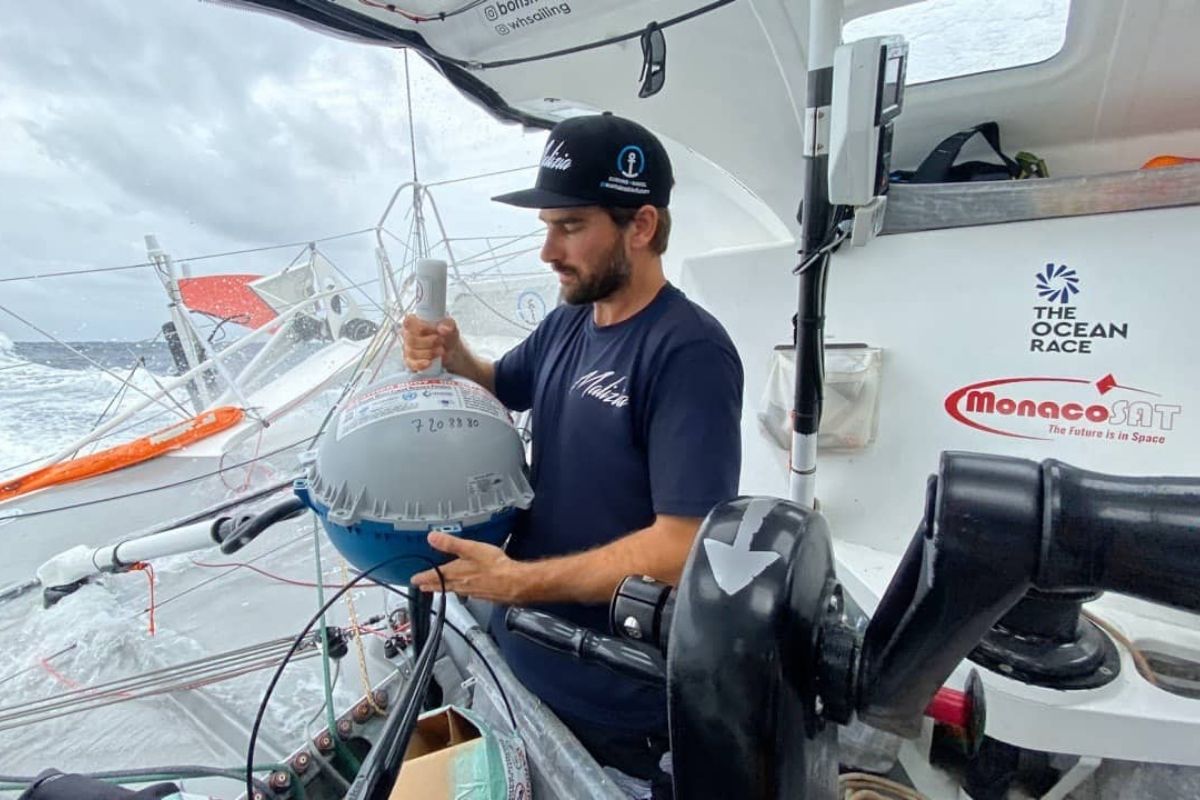 “The marine industry also has a key role in GOOS’ mission. Some of our earliest observations in the 1800s were taken from naval ships, yet, while a number of commercial ships already contribute to observations, through the Voluntary Observing Ships (VOS) network, there are many waters that commercial shipping does not reach. GOOS is on the cusp of involving yachts and other vessels, which are already takers and users of data, more deeply, as it becomes increasingly apparent that without expanded ocean observations we will not have adequate data to meet the needs of our forecasting systems and sustainable policies.”

“Ships, yachts and other vessels are already equipped with barometers and wind measurements. With a little more equipment, their crews, who are already trained to understand and log data, can become part of the GOOS fleet. Weather forecasters can then pick up their data to see if the wave height is approaching danger zone and a more hazardous storm is on the way.”

The Yachting Industry Must Get Involved

For shipping and yachting, the most important use of this data is to ensure greater efficiency and safety at sea – with more observations, the ocean models perform better, and both of these increase. More observations also mean improved shipping routes, less fuel usage and a greener environment.

While many commercial ships already make a considerable contribution, yachts have tremendous potential. Their crews are passionate about the ocean, and many want to contribute by collecting samples, which can assist in mapping plastics among other things. Events such as the Clipper Round The World Race, Vendée Globe and The Ocean Race are already involved and data from many of the racing yachts goes into the GOOS system. Since they sail in the Southern Ocean and across large stretches of dangerous, empty ocean, which few other vessels cross, their contribution is extremely valuable. 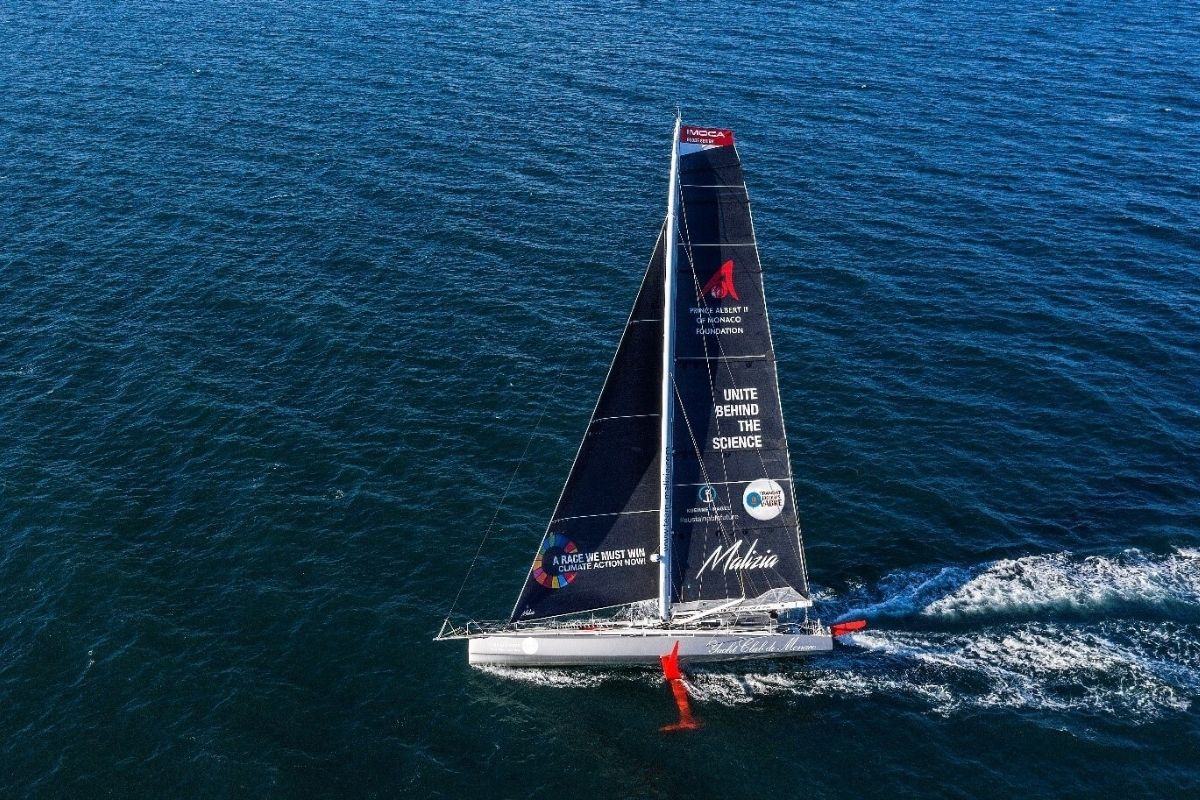 Martin Kramp, the Ship Coordinator for OceanOPS/UNESCO-IOC explains: “The instrument packages used on two yachts in the last (Volvo) Ocean Race weighed more than 20 kg with seawater only available when the water maker was running. The latest instrument packages installed on IMOCA racing yachts weigh less than 17 kg and have a water inlet in the keel.  This enables advanced observations to take place 24/7. We know how to fit them, so they can go into any vessel and the crew will see their own data online through our operations centre.”

On 31 January 2020, a two year agreement was signed between UNESCO’s IOC and the International Monohull Open Class Association (IMOCA) to carry out observation projects together through the Joint WMO-IOC Ocean Observing Programme Support Centre (OceanOPS) which internationally coordinates about 10,000 in situ ocean observing instruments for the continuous monitoring of the global ocean and the atmosphere above it.

An IMOCA Class representative comments: “Our skippers each share a variety of unique experiences; navigating to the most isolated corners of the globe whilst witnessing first-hand our impact on the World's ocean. As a result, the IMOCA Class understands the urgent need to protect and preserve our seas, making our work with UN agencies even more valuable."

A 40,000 nautical mile race around the world, the last Clipper Race launched in September 2019 and finishes as soon as the sanitary crisis allows. GOOS drifter buoys were placed aboard four Clipper Race yachts and successfully deployed on Leg 3 by Unicef, Seattle, WTC Logistics and GoToBermuda during the Southern Ocean crossing. They were donated to the South African Weather Service by NOAA (The United States’ National Oceanic and Atmospheric Administration), who the Clipper Race had previously worked with on the Ocean Acidification Programme during the 2017-18 race.  (For more on the Clipper Race’s contribution, click here). 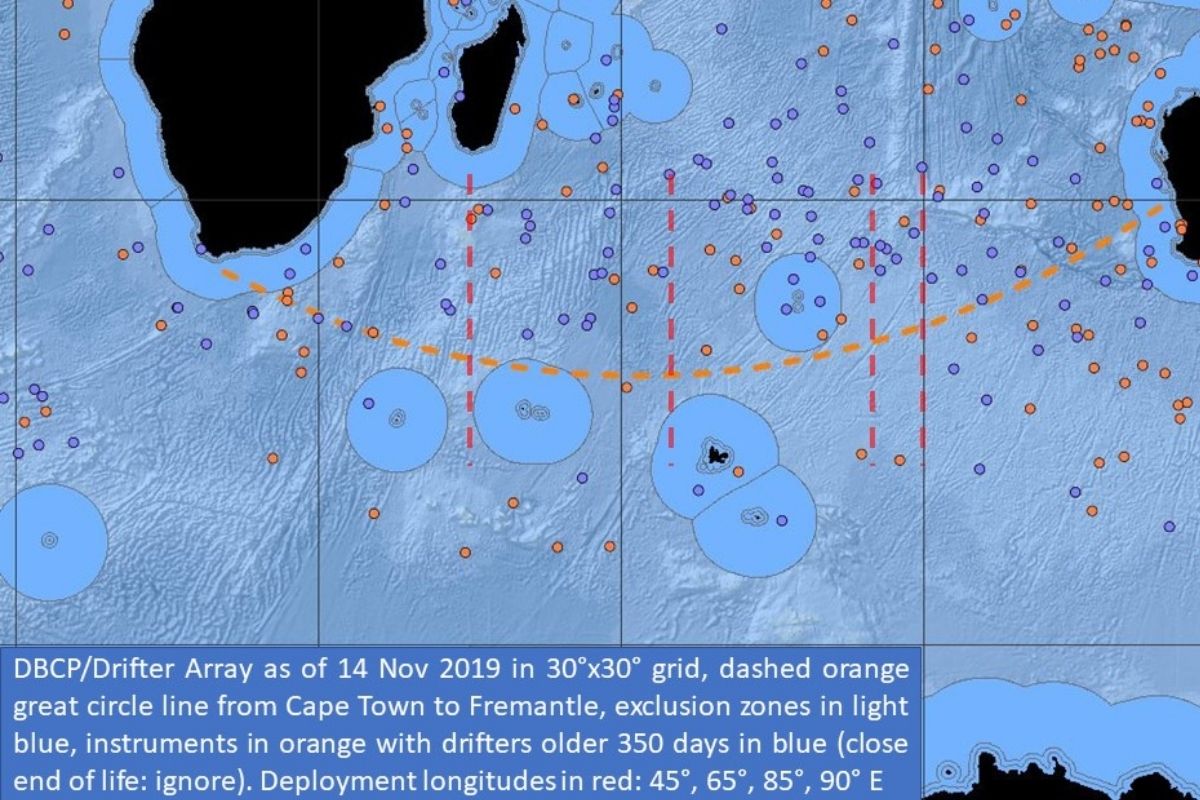 “Racing is a vital addition to ocean observations, but it’s crucial to think long term, and to acquire a broader base of observers. We need to enlist other champions to drive awareness, as there are areas where we have very few measurements,” says Emma.  “Supported by a network of professional yachts, there’s potential to acquire temperature, salinity and chlorophyll measurements, and to check the ocean’s carbon and plastic content.”

“I’m extremely lucky. Without sailing I wouldn’t be here, but the real work begins now as we step up to put the 2030 Strategy into practice and support the Ocean Decade. It’s a global dialogue based on the understanding that it will take several years for this to evolve. I’ve brought my passion for the ocean, sailing, my business skills and earth science together. It’s incredibly rewarding.”

“When I was studying oceanography back in 2008, we worked on climate dynamics and I had a sense of when we would feel the effects, but my sense is that it’s swifter than I anticipated, which gives me a real sense of urgency. However, I’m optimistic, I believe in human ingenuity and our ability to do what’s necessary. My message is that there are solutions we can all help with and that the yachting industry can make a great contribution.”

“It’s completely realistic in an industry of doers. Younger people have the biggest investment in the future and we need more young oceanographers. The next generation will have a really important role.”

As part of its contribution to the Ocean Decade, Superyacht Stories is honoured to collaborate with Emma by posting regular updates on the GOOS project. As a community, it’s time to step up to the challenges of the Ocean Decade that will help both sailors around the world and the planet.

For those wanting to get involved in the Voluntary Observing Ship Scheme, see the brochure for more information.

April 21 2020 marked the 50th Earth Day, and to mark the occasion, skippers of the IMOCA Class underlined their support for the scientists of the Intergovernmental Oceanographic Commission (IOC) of UNESCO with a short video sharing positive messages, from the confinement of their homes, about their commitment to science at sea.

From their love of the ocean to how they are contributing to a better understanding of the ocean through measuring human impacts in remote areas of the Southern Seas, watch the below video to listen to what they had to say.

Art for Sea's Sake: A Collaboration Between Rossinavi and Parley