From Wild Oats to Castlerock

Dan Oatley is no newcomer to the world of boats, large and small. He has worked on board the Queen Mary 2, captained several superyachts, crossed the Atlantic 14 times and cruised to the North Pole, but his real passion is speed. 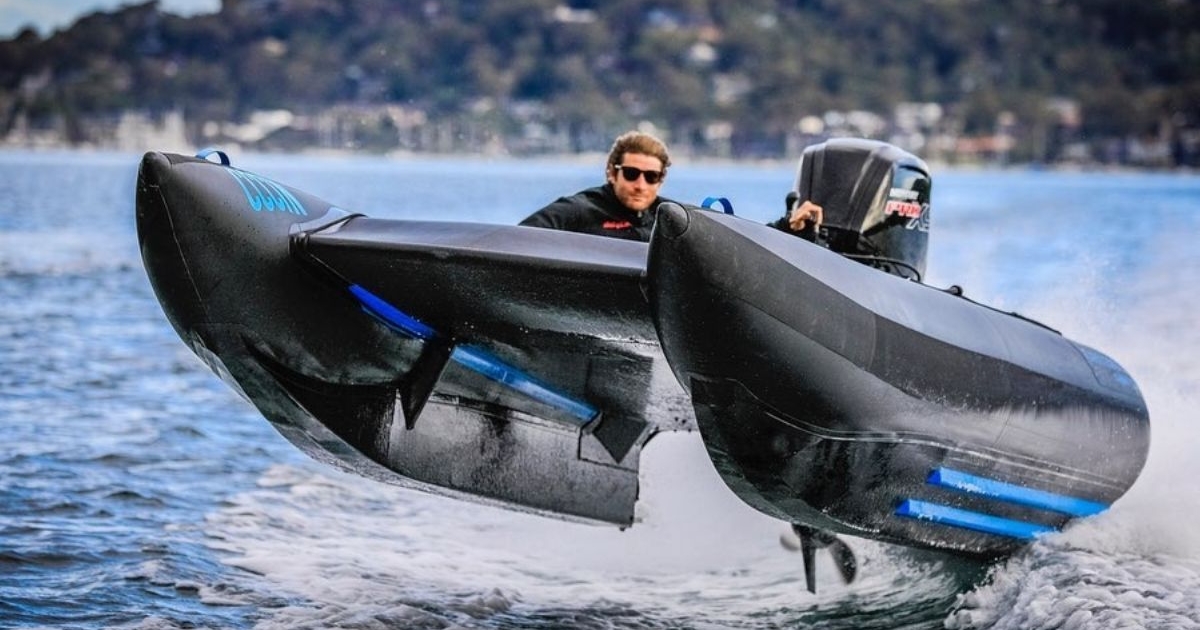 The grandson of the renowned wine producer, sailor and philanthropist Bob Oatley, Dan has competed in three Sydney to Hobart races aboard the family’s record-breaking Super Maxi, Wild Oats X1, steering the yacht across the finish line to victory in 2018. More recently, his love of racing spawned a new chapter in his career with the development of the Castlerock Carbon Cat, a true innovation in recreational RIBs built for speed. Already described down under as 'the Ferrari of RIBs', we caught up with Dan to meet the man behind the vision for this exciting and elite brand.

When did you discover a love of the sea?

My earliest memory is cruising and racing on my father’s Cole 43 with my mother, brother and sister on the waterways of Sydney Harbour and Broken Bay.

We are a large family with many interests, including a passion for the sea. My great great grandfather settled on the shores of Sydney Harbour in the 1870s and quickly established a love for the bays and beaches of Sydney’s Middle Harbour. He was a keen sailor and the founding member of our local Skiff Club which still flourishes today. My great grandfather, grandfather and father have all continued this tradition, participating in a wide range of nautical activities, so sailing became a way of life.

Even when I’m not at sea, I’m always looking for the next endurance adventure. Climbing in Chamonix, trail running, skiing, foil boarding or test driving new Carbon Cats. I'm also  passionate about reducing plastic in the ocean and I'm working towards creating my own campaign.

Who or what inspired you to pursue a career at sea?

The simple observation of the pleasures and challenges provided by the sea and the effect on my family is ingrained in my psyche. Although my parents provided an education which took me from the sea to the mountains and the bush, it was an easy decision to choose a career on the water. 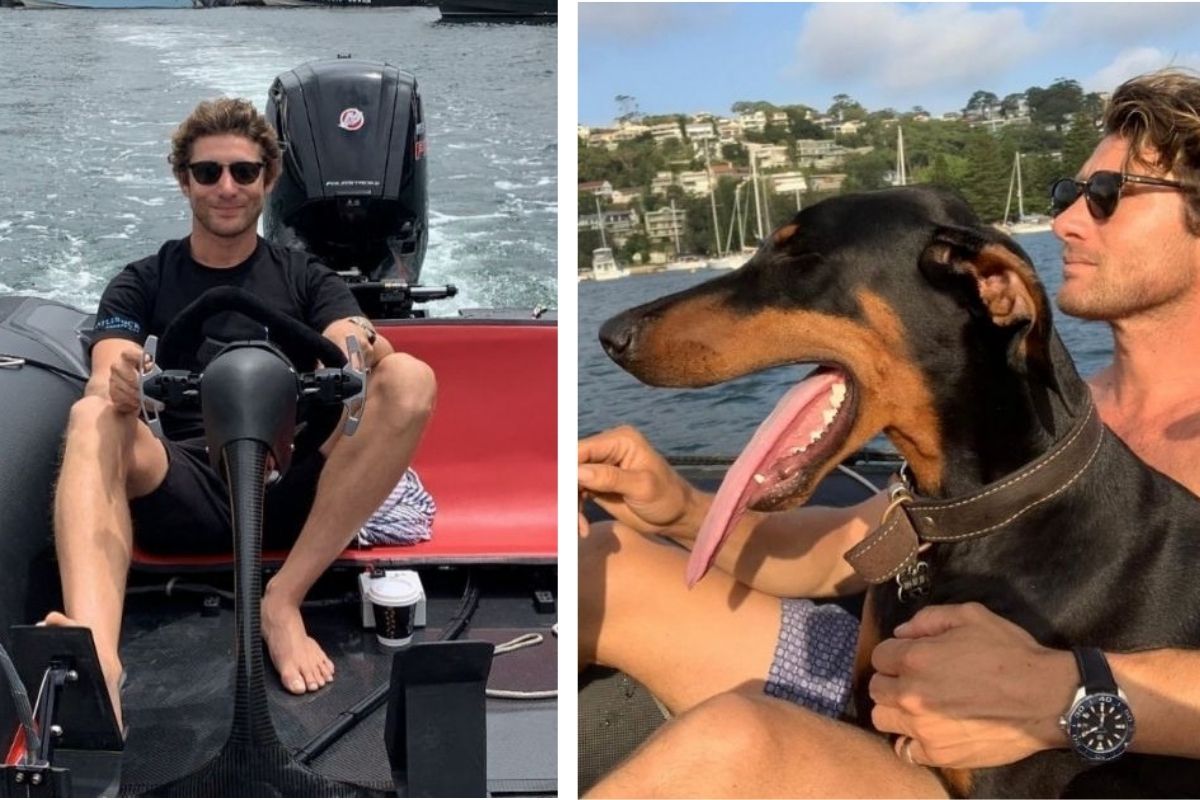 How did you come to work on board the Queen Mary 2?

I spent my early college years doing sea time on coastal freighters, mostly on the east coast of Australia. This required working my way up from the bottom and the experience of some of that hard labour remains a cherished memory. The ultimate goal was for something more meaningful and I always had an eye on the top job so, when the opportunity presented for an interview with Carnival UK, I wasted no time in applying. I was fortunate to enjoy a cadetship with Cunard which culminated in a memorable docking of the Queen Mary 2 in Manhattan with my ‘bum on the hot seat’ alongside the commodore of the Cunard fleet.

What took you to the North Pole?

I had travelled many times to all the usual tourist destinations in warmer climates, but it was while working as navigation officer on board the MV Aurora when we sailed to Ny-Ålesund in the north-western region of Spitsbergen, Svalbard. We were 245 nautical miles inside the Arctic Circle  so we saw polar bears and the scenery was breathtaking.

Did you enjoy working on board superyachts?

The superyacht industry is fascinating as the people you meet represent the upper echelon of society and you're exposed to cutting edge design and technology combined with the most ambitious expectations one can imagine. It was a real eye opener for me and, although some of my positions came with very strict confidentiality obligations, others were more gregarious. Suffice to say, managing an 85 metre superyacht with 30 crew for the most discrete and private owners was a fascinating experience. 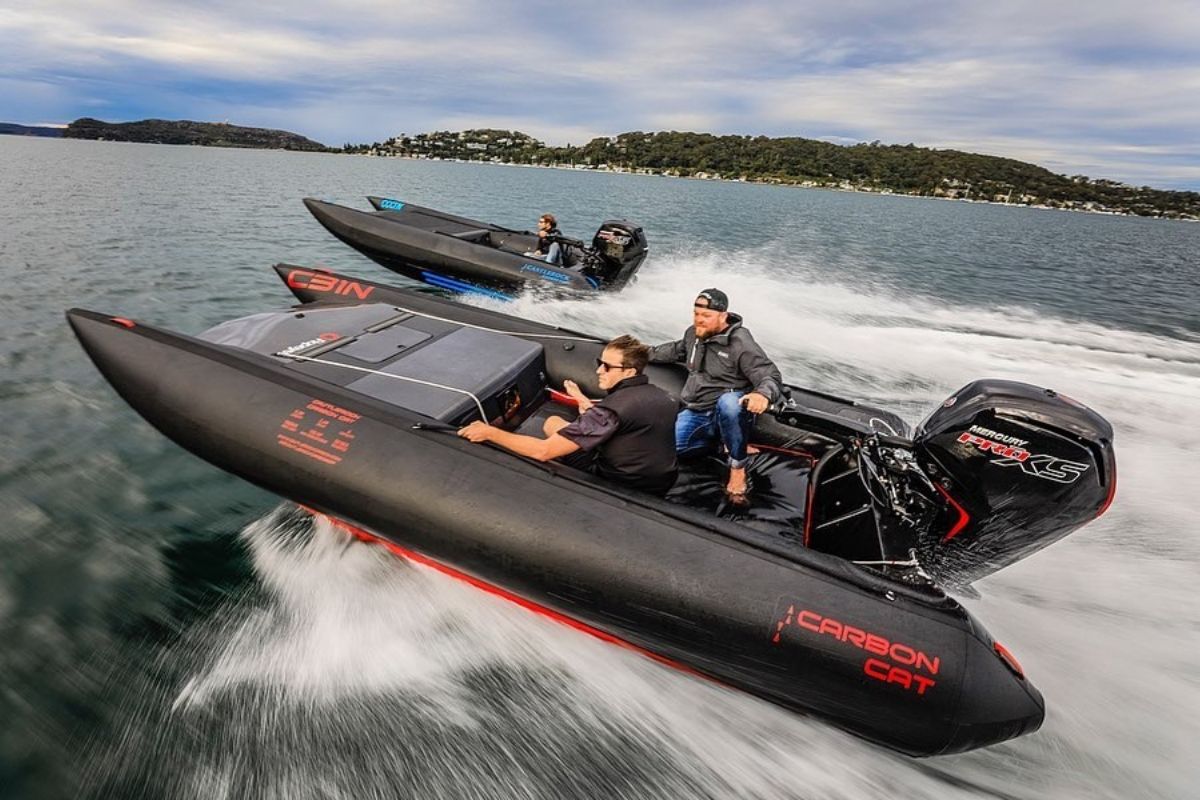 How did it feel to compete in the Sydney to Hobart Race?

The Sydney to Hobart Yacht Race is Australia’s premier offshore race and enjoys a special status as a right of passage for the Australian yachting community. It’s therefore mandatory for us, and although my grandfather has won it more times than anyone else and holds numerous records, I had to earn my position on the crew which was as interesting and challenging as the race itself.

My grandfather, was a very successful businessman so, when it came to sailing, his greatest joy was to gather the most competitive yet compatible racing crew to present himself at the starting line. He surrounded himself with the very best and it requires precision teamwork to perform at such a high level remembering that Wild Oats sails in the high thirties most of the time. Downwind anyway!

The experience of being part of such an illustrious crew and maintaining its enviable performance record remains one of my most satisfying events.

What sparked the idea for the Castlerock Carbon Cat?

The idea came about while I was watching the 2017 Americas Cup in Bermuda. The carbon fibre multi-hull foiling catamarans sailing at speeds over 40 knots inspired me to design and build a trailer size boat made from the best materials to exceed the performance of any boat of a similar size.

This design would incorporate sailing yacht design features with speeds exceeding 60 knots - very responsive and appealing to the eye. 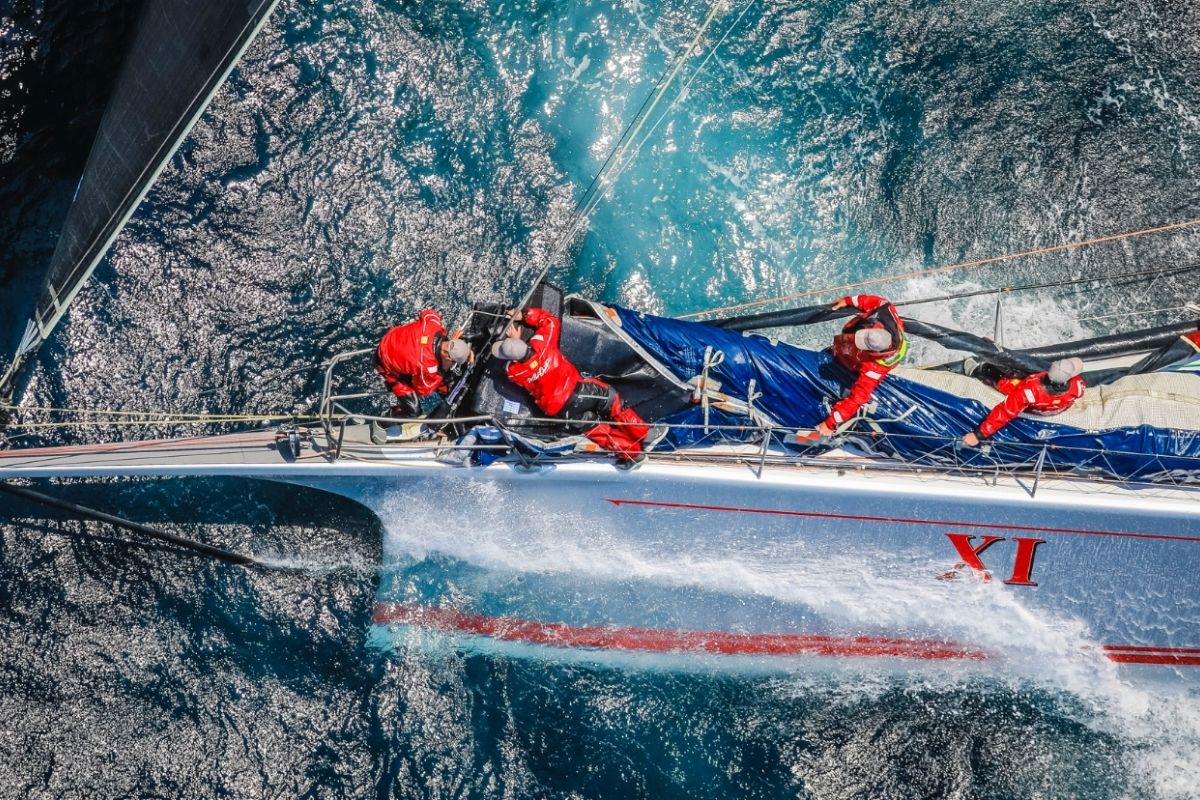 How does the Carbon Cat compare to other RIBs?

The most important differentiator is the overall handling and manoeuverability of the boat in all conditions. The unique ‘Australian’ design is down to a culmination of my own experience racing and working with superyachts.

We paid a lot of attention to detail in terms of the quality of build materials and the craftmanship which is why we chose to build the Carbon Cat in New Zealand, home to some of the best carbon fibre boat building, as well as having great hypalon tube manufacturers – and of course Auckland is also host to the upcoming Americas Cup.

Why did you opt for carbon fibre and hypalon?

Carbon fibre is lighter than fibreglass, reducing displacement and saving on fuel. It’s also more rigid, reducing the impact on other components such as deck fixtures. Not only is it stronger, which increases the life expectancy of the boat, its shape means it doesn’t deteriorate over time or change when constant force is applied. Carbon fibre also has a negative coefficient of thermal expansion which means it doesn’t expand or shrink as much as fibreglass when temperatures change.

As for hypalon, it is much more resilient to UV exposure and to accidental gas, oil, or chemical exposure, such as fuel spills, compared to their PVC counterparts, and it’s more resistant to shock and impact. 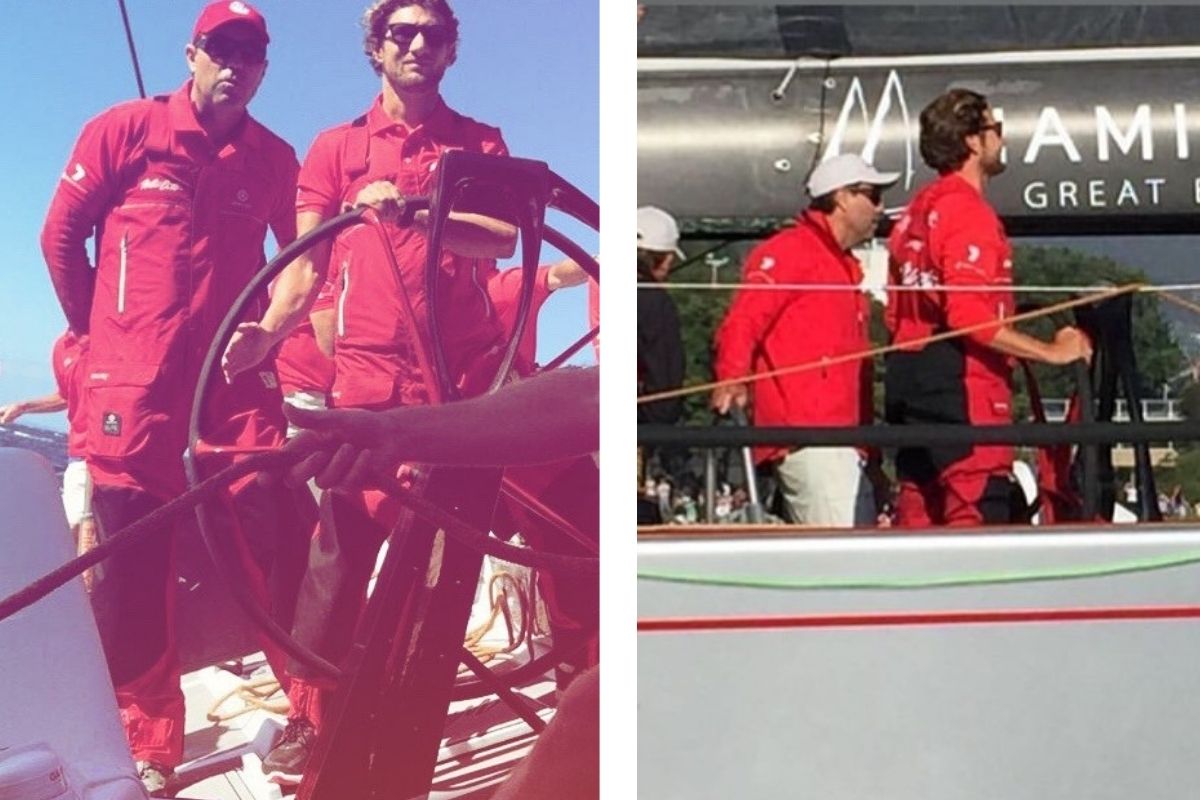 How many models are in the Carbon Cat range and who are your potential clients?

There are currently three models: the 5.3m Tiller Steer, 5.3m F1 Steer and 7.5m Offshore Chase. Following sea trials, we made a number of slight modifications to create outstanding handling in all sea conditions. The boat handles particularly well in open seas due to its aggressive dead rise angle and rigid tunnel hull profile.

The Castlerock Carbon Cat is for anyone who appreciates quality, performance and looking good on the water!

For superyachts where storage is limited, our 5m-7m range is multi-purpose and can be used for diving, guest excursions or provision runs, and it’s also light weight and easy to store. We’re confident yacht owners will appreciate the quality, innovation and unbeatable handling.

What’s the top speed and range at full throttle?

The latest fuel rate data at 80% rpm in flat water is calculated at 1.068 litres per nautical mile. As the boat has a 70 litre fuel tank it would therefore give you a range of approximately 70 nautical miles. 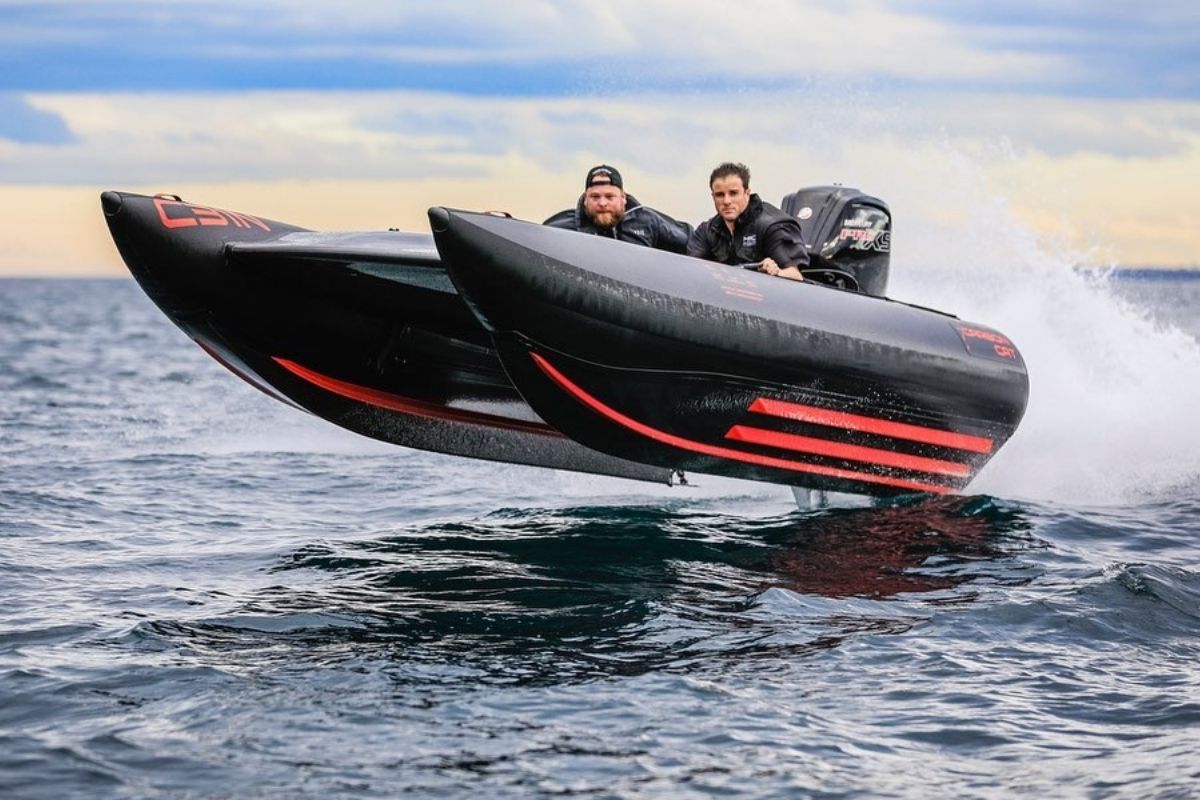 You’re attempting to set a time record from Sydney to Gold Coast – when will this be and what’s the target?

Yes, we are on standby for a weather window to attempt the race north. The distance is 374 nautical miles and the target would be to arrive at the Gold Coast in under nine hours. We will use two Carbon Cats averaging 48 knots, and the race will be a great way for us to demonstrate the boat’s performance at sea.

What other plans are in the pipeline for Castlerock?

We are planning a race circuit when production numbers build. I have been approached by the offshore race committee in Australia to create a Carbon Cat class once we have more boats on the water. This would be a lot of fun and it would certainly build awareness of the Castlerock brand.

Where would you like the business to be in 10 years?

I would like the brand to have a global identity, to be sold all around the world and be used on board superyachts.

What’s the most important thing you’ve learned in your career so far?

To create a harmonised relationship between all the heads of departments on board and to treat people equally irrespective of rank.

Who has most influenced or inspired you?

My grandfather Bob. He taught me to be a proud Australian and always to keep a few trustworthy friends close. He always went out of his way to help others and I continually hear new stories about all the ways in which he did so. This trait of his character has taught me a lot in my own life.

Shaping The Wave With Superyacht Nautique

Alex Rogers Of REV Ocean Is Saving The Seas

Taking Superyacht Travel To The Next Level With EYOS