With its recharged dining scene, Basque art galleries, perfect weather and quality surf, the elegant French seaside town of Biarritz should be firmly on your travel bucket list. Karen Hockney tells us why she fell in love with the city. 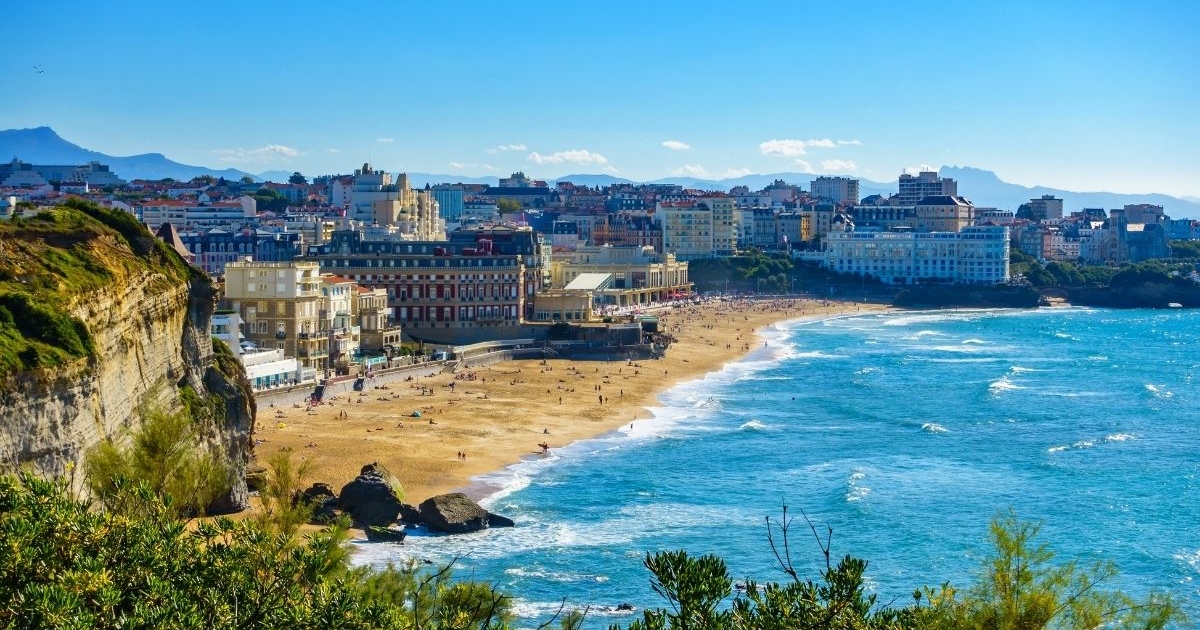 It’s not often that I’m lost for words, but Biarritz has that effect on me. So where to start in terms of all the very good reasons why you should go there? In truth, I’m not sure I really want to tell you. I like to think of it as my undiscovered west coast gem, exclusive to me and only me, but that would be selfish so here it goes.

Having spent 12 years living in France and more than 30 years holidaying here, I have visited more beautiful spots than you can shake a stick at.

In the winter, you can literally piste to plage it, getting your fill of skiing and boarding in knee deep fresh powder in the Alpes Maritimes before heading to the beach for a lingering sunshine filled lunch with your feet in the sand.

Come spring, you can suck up the glamour of Cannes Film Festival or pretend you have been washed up as an extra in And God Created Woman alongside Brigitte Bardot in gloriously over the top but charming Saint Tropez. 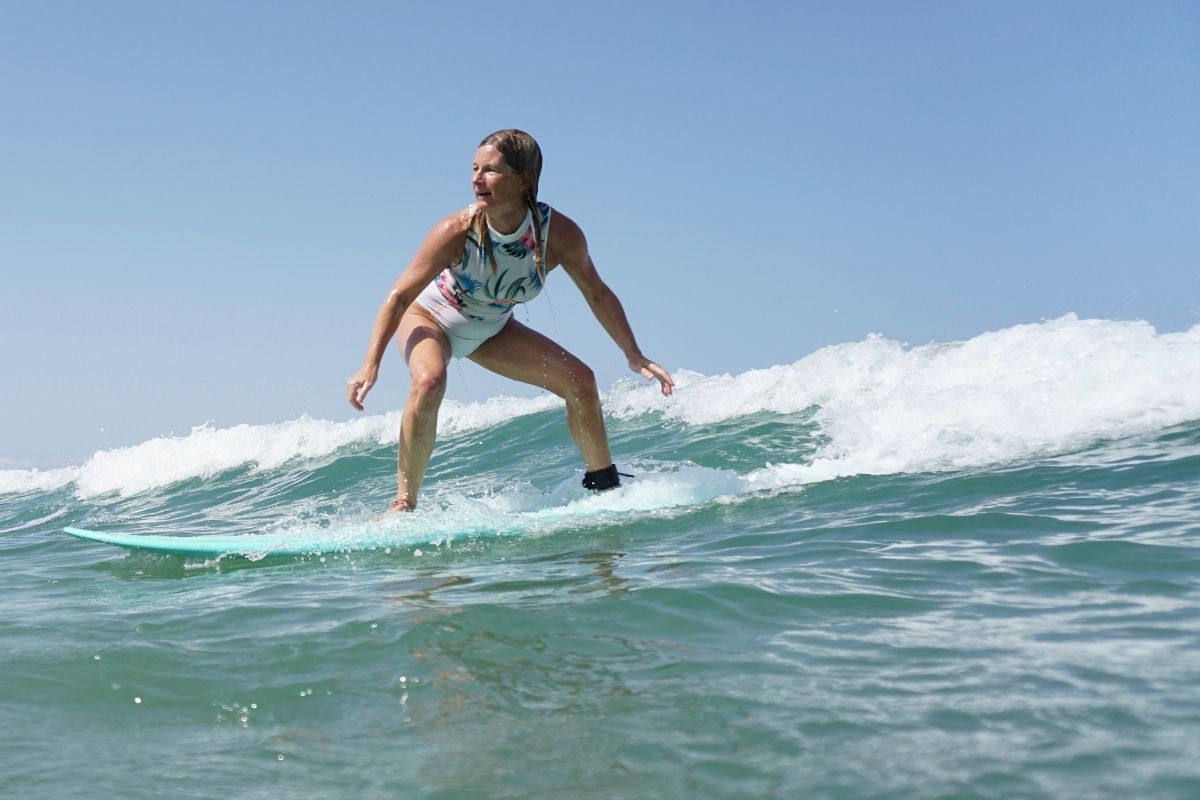 When it comes to the summer holidays, however, it’s La Côte Ouest that possesses that je ne sais quoi cachet which completely and effortlessly eclipses the Côte d’Azur.

Traditionally, it’s the super stylish Parisian and Bordeaux set which have made this their summer escape but latterly, the area that locals have dubbed Petit Californie for its laidback vibe is rapidly gaining favour among northern Europeans too.

It’s not difficult to see why. Wander around le Bassin d’Arcachon or Cap Ferret and you are struck by the sheer number of stylish young families in top to toe Boden and Petit Bateau, lunching on oysters and fresh catch of the day at a cool little tumbledown shack in the sand dunes where chilled out Hotel Costes anthems mixed by Stephane Pompougnac fill the air.

Frankly, Biarritz, the capital of Pays Basque, knocks even these gorgeous spots into a cocked hat. It’s in a class of its own because it somehow manages to be so damn cool without even trying. 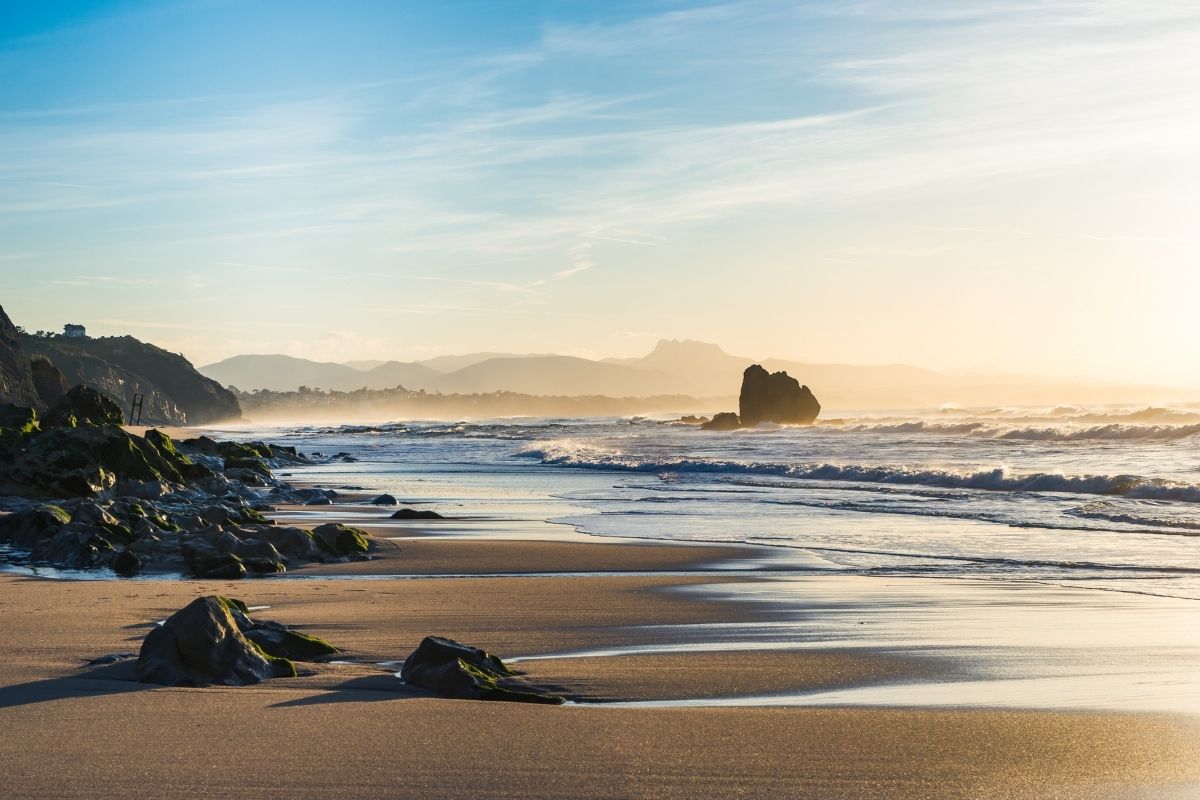 Picture wide open ruggedly beautiful Atlantic beaches that stretch for miles, disappear with the tides and have barely a soul on them, even in July and August.

Even better, there is a distinct lack of €25 a day sun loungers placed cheek by jowl on cramped private beaches where a couple of coffees will set you back €12 and a light lunch for two will cost in excess of €120. Instead, you queue up for a €3 latte at the beach shack alongside a salty selection of surf dudes with matted hair.

A strange, wonderful calm envelopes me every year on our drive to the west coast. I’m guessing there are not that many women of a certain age who will happily swap their daily fix of Vogue and The Times online for Magicseaweed.com to check out the swell, see how high the waves are going to be and confirm whether there will be an off or onshore breeze.

There has to be something in the air for me to voluntarily squeeze myself into a skin-tight wetsuit (not the most flattering look unless your first name is Cameron or Elle, evidenced by the fact that my daughters insist on walking several paces in front or behind me.) Even I can see that I bear more than a passing resemblance to an impregnated walrus. But do I care when there is surf to be had?

Summer surf is unpredictable. It can be as flat as a pancake one day, gnarly and a little bit terrifying the next. Hossegor, where the European championships are held, is a short ride up the coast.

The locals, many of whom decamp to Tahiti and Moorea during the winter months, reckon the best time to surf here is September and October. But when you are tied into the kid’s school holidays, the summer season will do just fine and generally, the surf here is pretty kind to beginners.

The feeling once you have caught a wave and are up on your board is indescribably thrilling (and I speak as someone who seems destined to plateau at a certain level having caught the bug at the ripe old age of 40.) On days when you experience a 100m beach break, unpopulated by small children and first timers, the buzz is impossible to describe.

Surf might be the main attraction for me and my best buddy Sarah, who flies down from London to meet me for a weekend every summer, but foodies will find this one of the most delicious areas to eat out in. 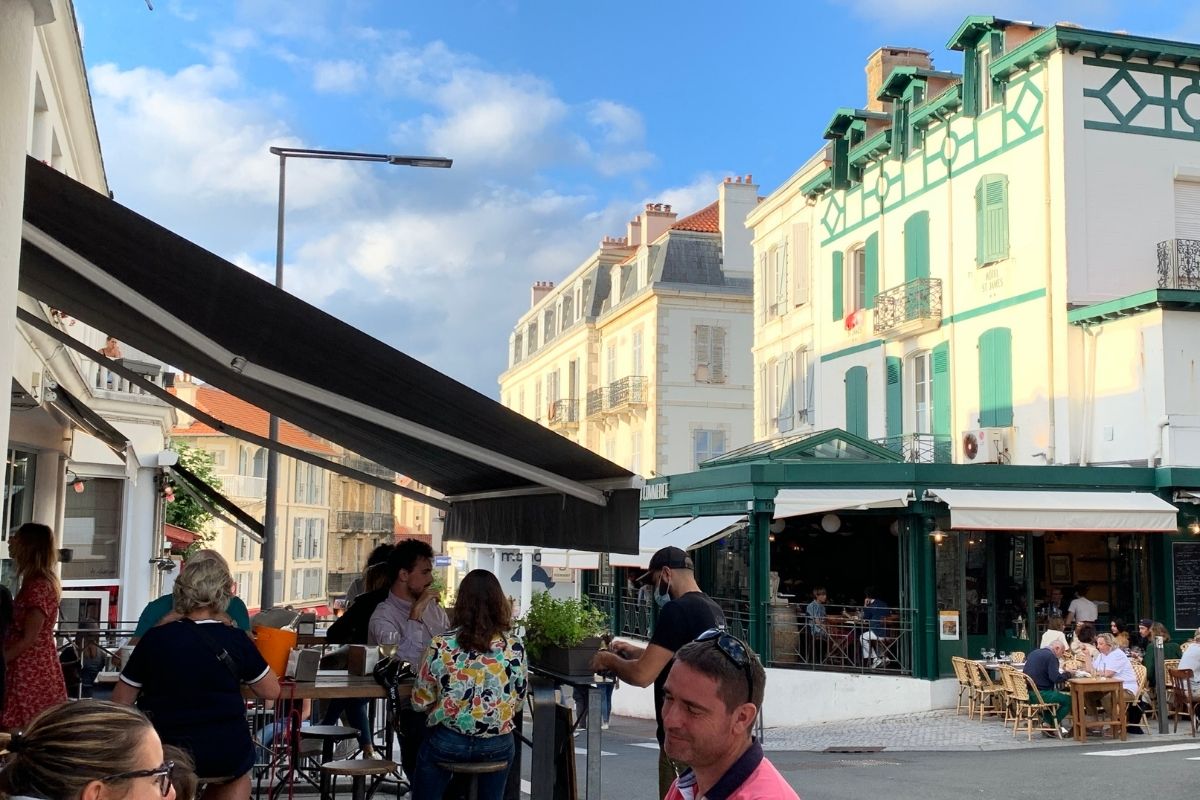 You could do a lot worse than start your day in les Halles, the daily market, where delicious boulangerie stalls offer freshly baked oranais )apricot pastries) and of course, croissants, as well as a mean cup of coffee.

If you can get a table at Bar Jean, opposite les Halles, you will love hanging out with the beau monde of Biarritz, tucking into mouth-watering platters of chipirons a la plancha, chargrilled padrons and enormous chilled glasses of rosé as the charismatic boss Emmanuelle and her equally charming son César preside over the constant flow of customers.

Bar du Marché serves similar fayre and is similarly packed most evenings but if you’re prepared to order a drink and be patient (after all, you are on holiday so why the rush), you can eat supper at midnight thanks to Biarritz’s proximity to neighbouring Spain, where eating before 10pm is considered bizarre.

After a few hours of surfing, shopping (a cool mix of sportswear and swimwear, vintage and eclectic home boutiques as well as some fabulous art galleries populate the central streets) and sunning on la Grande Plage or Cote des Basques - the most exciting beach for surfing - a sundowner mojito at Blue Cargo or Extola Bibi is de rigueur before a wander into town to decide which buzzy tapas restaurant or bistro you fancy dining in. The shabby chic but uber-cool Beach House at nearby Anglet is also worth a visit. 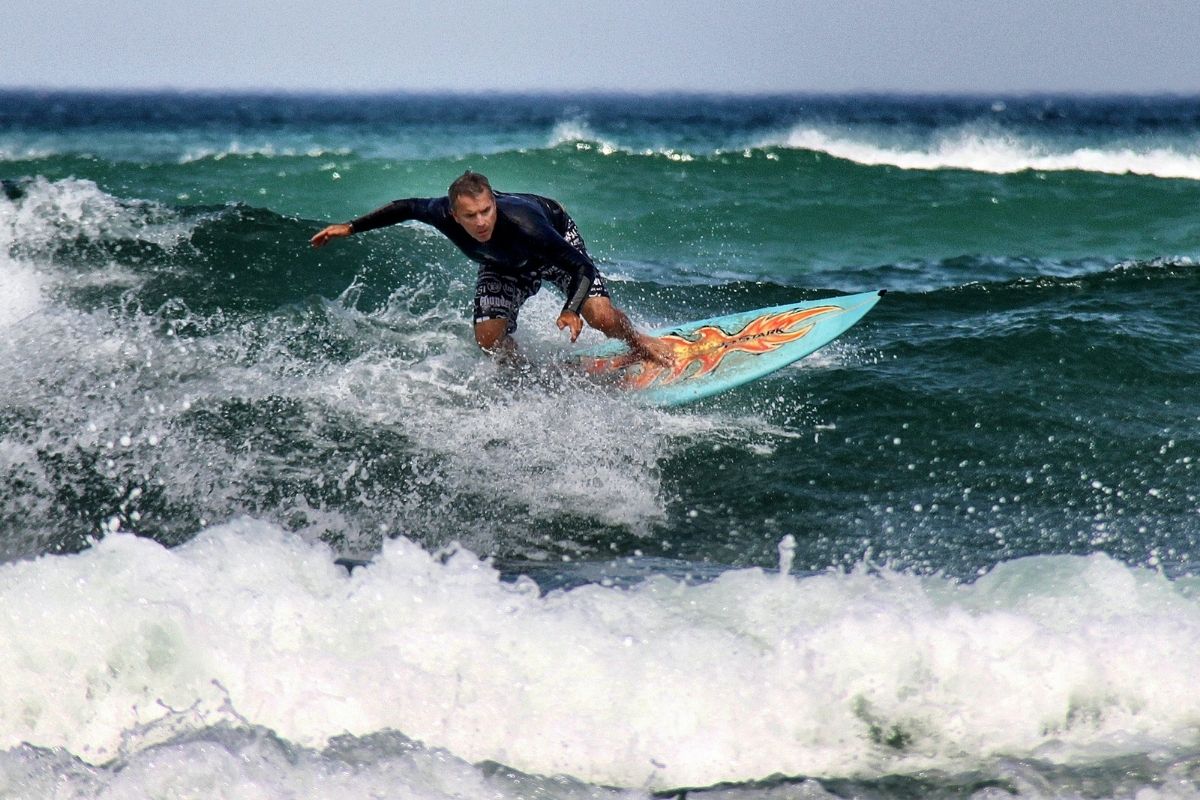 And if you fancy a real flavour of Spain, San Sebastian with its world famous tapas bars is a mere 40 minute drive. The pretty fishing town of St-Jean-de-Luz, with its stylish boutiques, pavement cafes and bustling port just before the border is also worth a look.

HomeAway.co.uk offers a large selection of apartments and villas for rent in and around Biarritz. Expect to pay around €1200 - €1500 a week for a central two bedroom apartment within a short walk of the beaches and restaurants and up to €6,000 a week in high season for a four bedroom villa.

Bokado, Milady plage, Biarritz 05 59 22 59 41. A beautiful setting, friendly service and razor clams to die for, and all while watching an epic sunset from the deck.

Cote des Basques is a great place for beginners, with lots of surf shacks offering boards and wetsuits for hire by the hour.

Lagoondy surf shack at Cote des Basques (06 63 65 74 89) will take good care of beginner groms through to intermediate surfers in search of a board.